Apart from going into my garden, I haven't left the house for seven weeks.  It doesn't particularly bother me, I don't go out a lot these days anyway.  We were supposed to be going away next week but, of course, that has been cancelled.  Probably our June holiday will be cancelled as well.  But, I'd rather entertain myself at home than be dead taking chances of catching the virus by going out!  The days zoom by, there's always something I can be doing.  Here's a miniature kit I finished assembling... 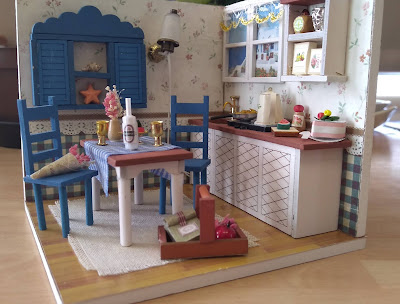 I bought seven of these kits, this is the third one I've finished so I have plenty more to get on with.

Also, a few weeks before this current situation I subscribed to Netflix.  Plenty on there for me to enjoy whenever I feel like it.

Then, of course, there is the internet, always something to research/read/browse.

Kindle is great too, I'm excited today that the latest Ellie Jordan, Ghost Trapper book downloaded, I'd pre-ordered it ages ago and it arrived today unexpectedly, as I thought it wasn't due out until later in the year.

And that's all apart from the usual things like cooking and gardening, both activities I enjoy.  Not that I do much gardening these days due to my physical unfitness.  One thing I've tried, that I saw on the internet, was slices of tomato planted in a pot of compost.  I was quite surprised when a few of the seeds started to sprout.

I came across some DIY Dollhouse Miniature Kits on Amazon, here's the first one I made. 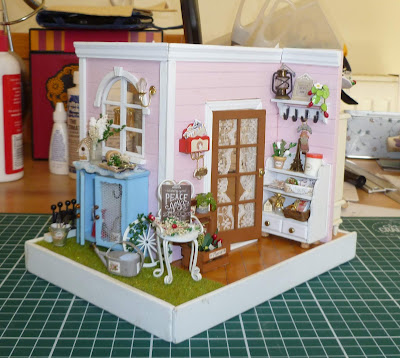 I thoroughly enjoyed assembling everything.  All the items are included in the kit, all you have to do is follow the instructions to assemble them.  I think they are 1:24 scale or thereabouts so they don't take up a lot of room on a shelf.  I've bought several more of these kits.
Posted by Ann at 10:29 1 comment:

How Retirement Affects a Spouse

It's been ten years since my DH retired and, looking at myself today, I've realised what an unexpected affect this has had on me.

Gradually I've become inactive in a lot of areas that I used to be interested in.  I hardly do any crafting, in fact lately I've done none at all.  I don't go out except for Wednesdays when I go out with DH to meet one of his friends and wife for lunch.  I struggle to take an interest in my house.  Previously I would keep the house to a high standard of cleanliness and tidiness.  The house is still acceptably clean and fairly tidy but not to how I like it.  My main jobs each day are doing the laundry and cooking dinner.  Each year we go away for three coach trips of five days each.  I don't have day trips out from home anymore, mainly because his driving is erratic and I get nervous, hence the coach holidays.

So, what can have happened?  What can I do about it?  I can't seem to put my finger on the problem.

One idea I have is to go out on my own occasionally, even if it is up to the local shops and stop for a coffee by myself.  I know he won't be happy with this, he will want to come with me.  He does not like being at home on his own.

This situation needs resolving.  I'm wasting my life sitting about at home.

I'm so glad that the 1950s look has been in fashion lately.  As a youngster I couldn't wait to wear the fashions of the 50s.  Then, of course fashions changed to mini skirts and shift dresses during the 1960s.  This year I decided to make two summer dresses that have a bit of that retro look.  A friend was interested in what I was doing and brought along a pattern she'd used in 1960.  It was her favourite ever dress and included a little bolero.  This got me very enthusiastic.  My friend lent me the bolero pattern and I made two to match the dresses I'd made.  Here's the original 1960 pattern... 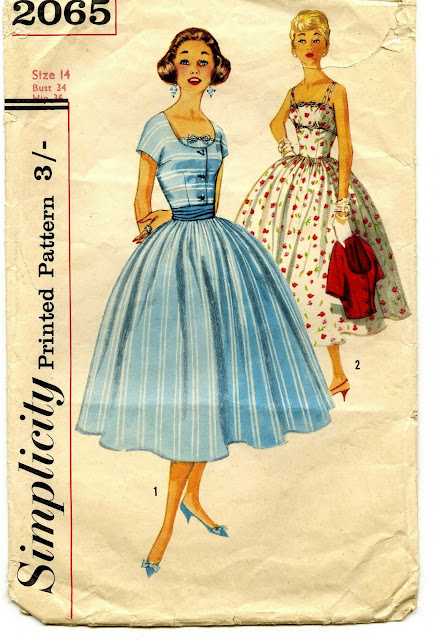 I didn't do the buttons and buttonholes,  even though the pattern says size 14 it was tiny, I'm a size 12 and I doubt I could have managed to fasten it up.

Here are the two outfits I made... 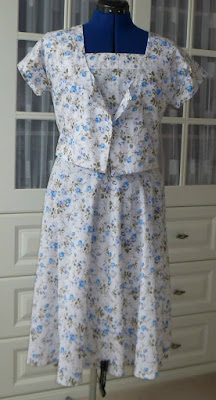 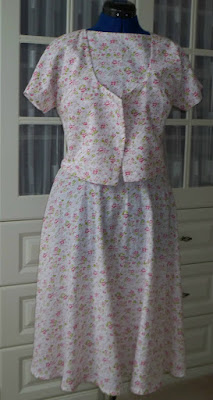 The bolero goes really nicely with these styles of dress, I prefer a sleeve so the bolero gives me that bit of cover on the tops of the arms I prefer.
Posted by Ann at 13:04 1 comment:

Starting to clear out my Vegtrug, tubs, pots and baskets.  Everything has done well, some better than I expected.  The Cherry Cascade tomatoes did brilliantly... 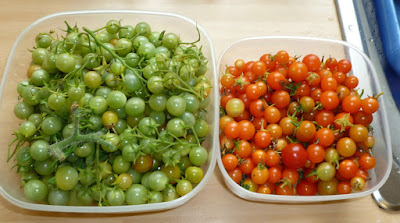 One tub of green ones for chutney and the final few red ones.  These are definitely a favourite and I will grow them again next year, they are so prolific.  There must have been hundreds from the three plants I grew, beautiful and sweet, not as small as I expected from the seed packet, mostly a proper cherry tomato size.

The carrots I grew were Paris Market 5 - Atlas.  They turned out a bit strange.... 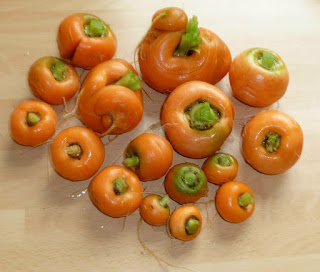 Some were really knobbly, some were small and the stems grew out of the carrot in a bit of a hollow, making them awkward to prepare.  I wanted a small carrot to grow in my Vegtrug but probably won't grow these again.  Also, the ones I grew in a small trough placed on the ground soon got carrot fly, did quite a bit of damage.

My cucumber did well, actually got two cucumber off it, they were about 6 or 7 inches long and tasted lovely.  They were grown outdoors in my Vegtrug and did surprisingly well for an indoor type.  Have also had success with baby sweetcorn, Minipop , been having some very nice baby sweetcorn this last few of weeks.  Courgettes, runner beans, peas, leeks have all done well in tubs and hanging bags.  Purple sprouting broccoli is coming along nicely, did have a few sprouts off it but expecting to have some ready for next spring harvesting.

I've bought a small paraffin heater for my greenhouse, hoping to get things off to an earlier start next year.  My big fault is starting seeds off rather late.
Posted by Ann at 12:35 1 comment:

My tomatoes are always very late ripening, though I have had the odd few for a couple of weeks now.  At last they are all starting to ripen.  Here are the ones I picked today, plenty for the two of us with our gammon... 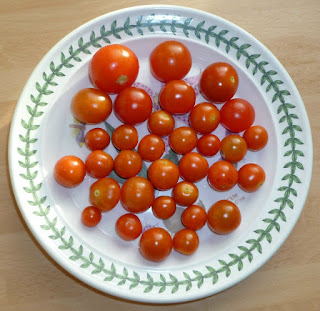 There are a mixture of three types here.  The bigger ones at the top of the plate are from a plant a friend gave me, could be Moneymaker or Gardeners Delight, can't remember.

Four or five of the slightly smaller ones are Sweet Aperitif , a trial variety .  I'm growing the Sweet Aperitif in hanging baskets and they are doing well.  The high winds a couple of weeks ago did break a couple of stems on one basket of them but there are lots to come on all of the three baskets.

Lastly, the very small ones are Cherry Cascade .  Two plants are in those hanging plastic type growing bags suspended on a hook on the fence, and one is in a hanging basket.  These I will definitely grow again, loads of tiny tomatoes, not as tiny as it says on the seed packet though one or two are currant sized.  Very tasty too.  And they survived the high winds.
Posted by Ann at 19:35 2 comments:

My containers have done well and the new vegtrug has been fun to use.  The strawberry plant didn't do well, it was so wet in June that the strawberries got mouldy as they ripened so only got a couple worth eating.  The cucumber plant is growing amazingly, not had any cucumbers off it yet but there are quite a few growing nicely.  Radishes were a failure, think that was the poor weather again.  Leeks are looking good, should be able to harvest some of them soon.  There are other bits and bobs in the trug, carrots, spring onions, basil, chard, and some salad leaves I sowed the other day, just small amounts of each.  Anyway, here's a picture... 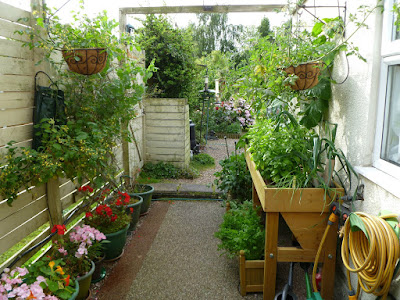 Below the trug (on the right) are carrots, they will be ready soon, they are the small, stubby type.  Beyond the carrots are some peas, sowed these later on than the ones in the big tubs so expecting to harvest some soon.  Above the trug are some cherry tomatoes in hanging baskets, lots to come on those.  Tomatoes in hanging baskets take a lot of looking after, they dry out very quickly.

On the fence on the left there is another hanging basket of tomatoes, these are tiny tomatoes, smaller than cherry types, thought they'd be interesting to grow.  Also, hanging off the fence, are two vertical growing pouches, one has the tiny tomatoes in and the other a couple of pea plants, both are doing well.  Not shown in the picture is another vertical growing pouch containing a courgette plant, it's doing well, had some courgettes off it, the round sort, very tasty. 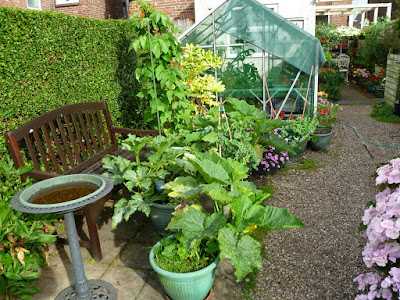 Further into the garden I have some big tubs containing courgettes, again, had loads off those.  Peas, these did really well, had more peas from them than I got from the ones in the ground last year.  Lastly, runner beans, they aren't ready yet.

I've enjoyed my veg gardening this year, my back didn't play up once like it would if I try to garden in the ground.  It's containers for me from now on.

Laurie, thanks for you comment, I sent you an email, did you get it?

You are welcome to use any of my pictures or ideas.
A link back to me would be nice though!